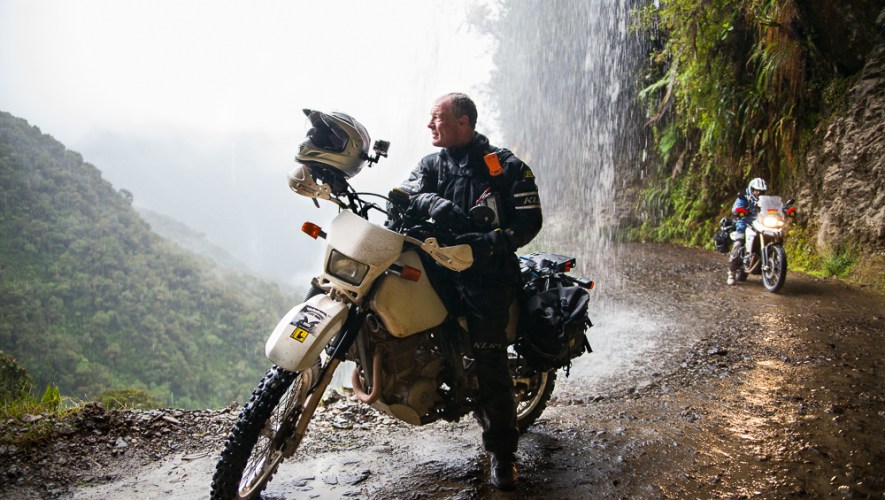 (Photo above by Sergio Ballivian)

Setting goals since his Eagle Scout days, Bill is also a certified flight instructor, has earned commercial pilot ratings in powered aircraft, seaplanes and sailplanes, is an accomplished sky diver and scuba diver, and has won numerous competitions in motocross, cross-country mountain biking, sailboat racing, and adventure riding.  Bill has won two Tour de Dirt mountain bike state championships, has completed a double century bicycle ride (200 miles in a single day) and has fulfilled his dream of an unsupported, solo transcontinental bicycle ride across the northern tier of the United States.

In 2017 Bill was honored to teach a week-long off-road riding course for the Fort Worth Police Department and he scored 100% on their on-road qualifier after only two hours of instruction. He has also added to his professional repertoire by attending BMW’s Off-Road Instructor training in Hechlingen, Germany, a stringent, week-long course focusing on the art and craft of precision big bike skills in the rough. He has been on the podium at the Rawhyde Adventure Rider’s Challenge two of the three times he has competed, with first and second place finishes, and represented his country as one of three men competing with Team USA in the 2010 BMW GS Trophy held in South Africa. He has ridden motorcycles on five continents and has hiked through the Himalayas to Mount Everest Base camp with his lovely wife Susan.

“The best part of any adventure is sharing it,” says Bill, and he does just that through his stories and by teaching others some of the finer points of managing a heavy dual-sport motorcycle through questionable terrain.

“Ultimate” is a subjective term. I have met plenty who were much more deserving of the accolade. One man’s ceiling, I have heard, is another’s floor. How true. I don’t presume that my adventures are any more worthy of merit than many of yours, but they are all I have to share. I appreciate your visiting my blog and I hope you enjoy these exploits a fraction as much as I have enjoyed living them. Most importantly, I hope these stories inspire you to go outside and create your own.